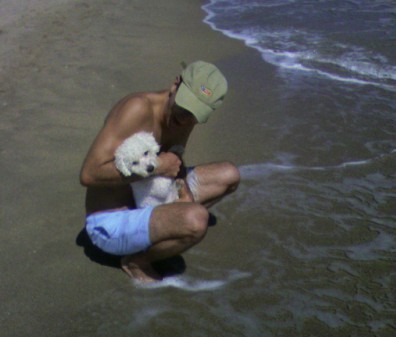 It was May, 2017 when my friend Omar noticed that Violetta had a growth on her belly. When her doctor diagnosed cancer of her mammary glands I was stunned. I was even more shocked when he told me that there was nothing he could do for her; surgery was too risky at her age. She had just had her 14th birthday May 17th.

I began researching extensively and found out there were a number of things that might help. Mushrooms, for one. Not ordinary mushrooms, but reishi and turkey tail mushrooms. I was especially intrigued when I watched this 91- year-old man attribute reishi tea to saving his life.

Then I hit upon a Ted Talk by the brilliant mycologist, Paul Stamets. He was given $2.1 million to conduct a clinical study on turkey tail mushroom and breast cancer. His 86-year-old mom overcame stage 4 breast cancer whereby this mushroom supported the reinforcement of her immune system to fight cancer. The story starts at 7:53 into the video.

Wow! I became hopeful! And what really shocked me was when I saw videos by this guy, who has been giving his dog cannabis oil ever since her cancer diagnosis in the spring of 2015, and who is cancer free today!

And I found out about other things, like turmeric, gynostemma, marine phytoplankton, and dandelion root!

So…. Violetta receives two different kinds of oil orally, three times a day, AND another very strong concentrated oil that I inject into her rectally twice a day.

She either is given liquid extract of dandelion root, or sometimes I boil the actual roots to make a strong tea for her. Then there’s the liquid turmeric extract, the marine phytoplankton, and when I’m particularly determined, I make her fresh vegetable juice from apples, carrots, cucumbers, beets and celery. Of course her diet includes organic baby spinach and arugula!

As a conductor, she hears a lot of great music, which I’m often studying. And as a Nichiren Buddhist, she hears me chanting Nam myoho renge kyo every day as I pray for her total happiness, health and victory!

It’s been 7 months. She’s not suffering, and doesn’t seem to be in pain. She isn’t able to walk with one of her legs and wears a diaper because she lost control of her bladder over a year ago. And there have been open wounds since the summer, so I clean them with peroxide every day and change her bandages. Other than that, she still loves to play football! Check out my site: 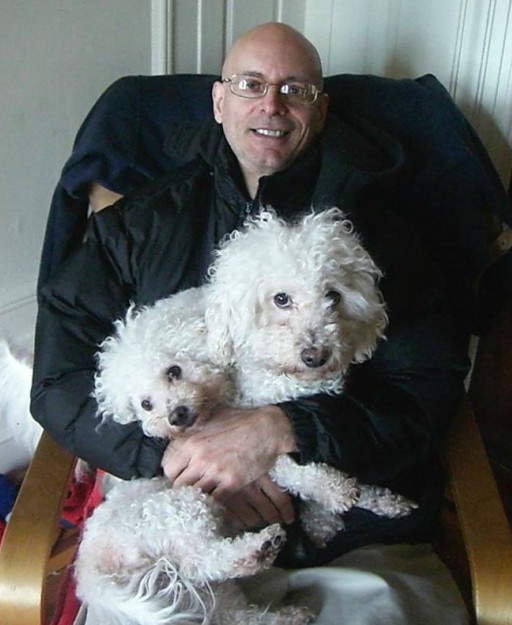 Left to right: Violetta and Almafuerte

On December 21st, the night of the winter solstice, I had to ask Violetta’s doctor, Tudor Suciu, to help her end this lifetime. She had been hopping on 3 of her legs for some time because of a swollen 4th leg, but she didn’t seem to mind. In fact, Violetta continued to run like crazy after her football when I threw it down the hall. But she gradually became weaker and spent most of her time lying down. Her appetite was unaffected and the daily dosages of the various teas, extracts and oils must have kept her pain free. Her doctor expressed surprise that she was active much longer than his expectation. Then, in her last few days Violetta couldn’t hold down food, and when she started to cry out, I immediately called the doctor to give her the injections that would immediately end her discomfort. Of course there was no way I would accept her being in pain.

She was lying on her pillow, which I placed on my lap in front of my Buddhist altar, as I chanted the mantra Nam myoho renge kyo, alternating with my uncontrollable sobbing. I let a few friends know that the doctor was on his way to “help” her. And then the most amazing thing happened. There were soon 9 of us stroking her and chanting together. The doctor came directly from work and Violetta looked up at me with a dazed look in her eyes. I had never seen such a look before and immediately knew that she was truly ready. We sang her favorite song “La Violetta” to the tune of “La Cucaracha”, and then resumed chanting while the doctor administered the injections. My friend Cleopatre brought her a magnificent burial garment, and the next day we buried her with her life-long companion, Almafuerte, attending the burial. Clearly, it was the most appropriate action to take at the most appropriate time.

She joined the household when she was 9 weeks old. She lived 14 years, 7 months and 3 days. Violetta was an amazingly energetic little girl, who behaved just like a puppy throughout her life! And a mere look in her direction, or my caressing of Almafuerte would immediately set her tail joyfully wagging. And what a voice! What brilliant resonance!

I miss her, and I’m glad that she didn’t suffer. She so enjoyed her years with us. And I relish the great privilege is was to be, first her parent, and more recently with her advanced age, her grandchild.